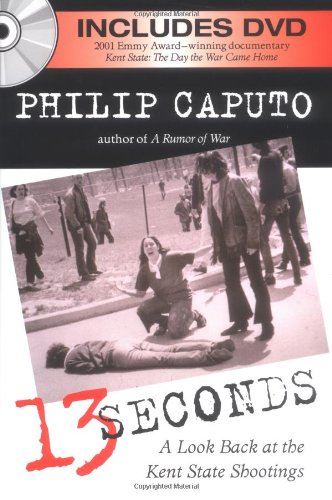 13 SECONDS: A Look Back at the Kent State Shootings

Caputo, best known for his groundbreaking Vietnam memoir, , uses his strong reporting skills to reconstruct the events of May 4, 1970, when National Guard troops in Ohio opened fire on Kent State University students during an antiwar rally, killing four and wounding nine. Caputo covered the aftermath as a 28-year-old reporter, three years removed from his tour of duty as a Marine lieutenant in Vietnam. After returning to Kent State in the fall of 2004, he produces an eloquent narrative sprinkled with his strongly voiced opinions on Vietnam, Richard Nixon ("that glowering man with the soul of Lear") and the tenor of the times ("Cops had become vandals, the forces of disorder and those of order had fused"). At Kent State, he writes, "the forces of authority had gotten away with murder." Caputo's retelling of the "massacre," as he calls it, and its aftermath is a worthy addition to the record. On the other hand, Caputo's reflections are relatively brief—an extended essay. An appendix with the 1970 report of the President's Commission on Campus Unrest, may complete the story but makes for dry reading.