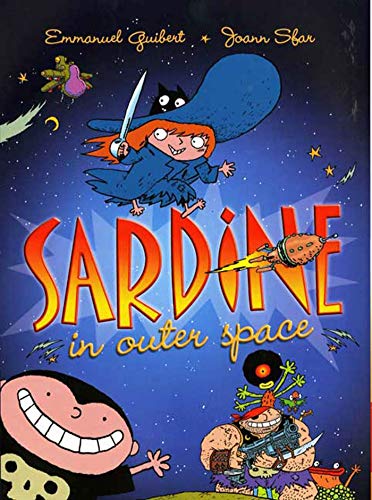 Punky heroes, interplanetary action and unpredictable bouts of silliness characterize these hyperbolic color comics. Sardine, a fearless red-haired urchin, wields a silver saber and killer enthusiasm. She travels on a rattletrap, fig-shaped spaceship called the , goes shoeless and wears blue tattered clothing; a grinning black kitten rides atop her floppy hat and hisses "The End" at each episode's punch line. Sardine's Uncle Yellow Shoulder, a beefy, stubbled space pirate, "teaches [children] to disobey," according to one disgruntled villain; Sardine is his cutest and most dangerous trainee. She and the crew (including Little Louie, a boy who'd be at home in Sfar's Little Vampire books) tangle with their nemeses, the pencil-mustached Supermuscleman and lizardy brainiac Doc Krok. They also endure a dance-off on "the loathsome planet Discoball" and kick back with a virtual-reality game called No-Child-Left-Behind-School II ("Isn't that game a little violent?" Yellow Shoulder wonders). Some episodes get rough—Sardine lures a "space leech" into a rocket's fiery path and remorselessly chops fishy underwater aliens in half. Other moments are just gross, as when the baddies load Sardine and Louie's sundaes with nasty ingredients. Guibert and Sfar (co-creators of the Black Olives series) sling jokes, make up funny names and backhandedly salute the original Star Wars movies by including a primordial soup slithering with creatures and a wacky cantina. Their plots are wispy, but the pirate humor and gothic panels—abundant with Jolly Rogers, drippy slime and creepy-crawly creatures—provide surprises in every space vignette. Ages 6-up.