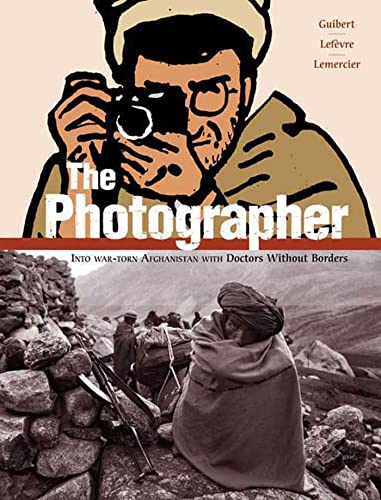 This documentary graphic novel brings together starkly beautiful black and white photographs taken by Lefèvre, intimate drawings by Guibert, skillful design by Lemercier and a vibrant translation and thorough introduction by Siegel. In 1986, photographer Lefèvre was hired by Médecins sans Frontières (MSF; Doctors Without Borders), to document a mission into northern Afghanistan. Along the way, he and the doctors, guides and interpreters with whom he traveled endured physical hardship and the fracas of war. In one memorable scene, the group must cross an open plateau where Russian planes fired on the previous MSF caravan. Photographs acting as panels emphasize the vast openness of the plateau, while drawings allow a glimpse of the small human gestures of the travelers. Arriving on the other side of the plateau, they reach a wooded area “where, two years ago, they buried the man who didn't make it.” This revelation is punctuated by a large photograph of the burial mound under the trees, the mix of drawings and photographs heightening the emotional impact. Originally published in three volumes in France, the book has sold more than 250,000 copies there, and the reach of this magnificent work promises to extend far beyond the graphic novel community.