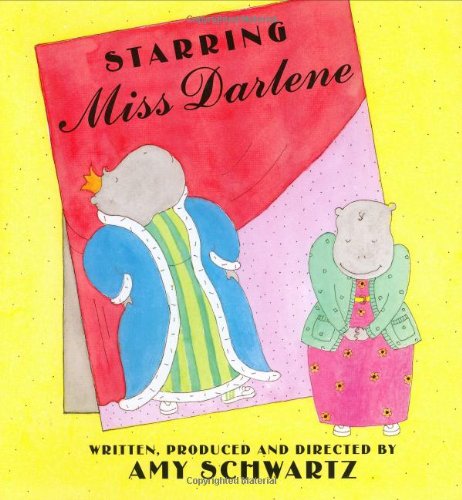 This book, the cover announces, is “written, produced and directed” by Schwartz ( ), who deserves hearty applause for her efforts on all fronts. Her art’s abundant funny flourishes are matched by a droll, perkily paced narrative. Taking center stage is an earnest, engaging hippo who “wanted to be a star.” After enrolling in theater class, Darlene is assigned her first part, playing “the Flood” in a performance of Noah’s Ark. This entails dashing onstage and throwing water on the ground, an action the director calls “simple, yet vital.” Alas, it’s not so simple: Darlene’s feet get tangled in her long blue gown and the water pours onto the front row, drenching the theater reviewer for , who, the next day, proclaims the show “a drenching, yet refreshing experience.” Spying the same reviewer in the audience on opening night of the class’s next production, Darlene freezes. When she finally manages to speak, she mangles her lines (“We will rebuild our rivers! Our cities will flow again!”); the critic gushes that the actress “used words in a way this reviewer has never even dreamed of. A triumph.” And after her next faux pas—the exhausted thespian actually dozes off while playing a dormant Sleeping Beauty—the admiring reviewer praises her for enlivening what “could have been a tired production” and proclaims “ .” And with this comedic tale, Schwartz shines as well. Ages 4-8.