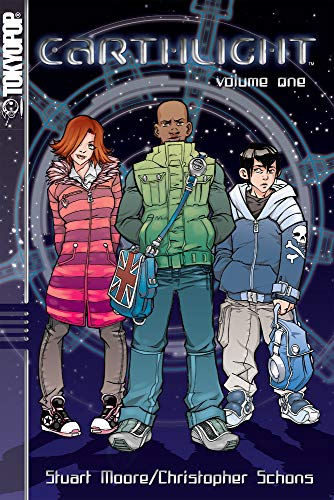 In Earth's first space colony, teens will still be teens, sneaking off to an abandoned observatory (which resembles water towers used for the same purpose in Earthbound stories) just for kicks. An accident results in three deaths and a change in colony administration. The story proper picks up with the new kid, brought to the colony by his father, the new administrator, and mother, the new schoolteacher. Other kids have their own issues: Lise can't stand to be touched, and Xan is a self-centered punk picking fights to establish his alpha status. Schons's art is a standout; he draws spacesuits and SF gizmos well but doesn't lose sight of the characters. Although the book is part of TokyoPop's Global Manga line, the main manga influence is on the character design. Moore introduces concepts and characters effectively with just a few text lines, but some of the characterization is two-dimensional. The mother is too perfect, with just the right tale of "when I was your age" for every teen drama. Basically on the moon, 's situations are still universal and appealing for a YA audience. The most promising plot points raised (like the kids' anger at their loss of control and what caused the deaths) remain to be resolved in future volumes.