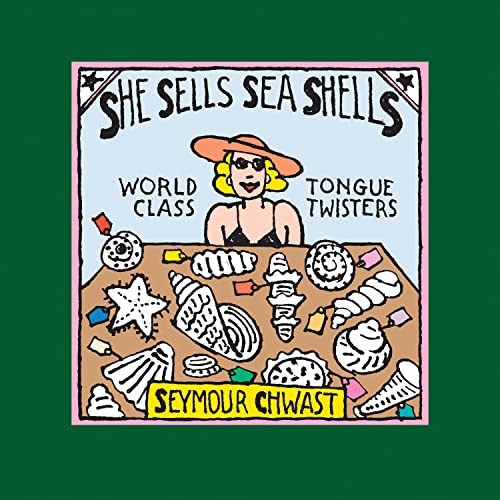 Drawing on his distinguished career in graphic design, Chwast's ( )visual exposé of tongue twisters teems with humor and cheek, starting with the debossed cover's inset art of a woman in a beach hat before a table's worth of shells strung with price tags. Mouths with “twisting” tongues line the endpapers, while the interior illustration for the eponymous tongue twister features that same woman, now in mid-stride away from the table, a “Sold Out” sign the only object upon it. The lines and use of color are posterlike, closer to Chwast's work for adults than to his more fluid picture book illustration. The humor can also be goofy or dark. In “Cheery chickens cooking in the kitchen,” a stoic oversize chicken perches in a cooking pot, red flames shooting up from below, a lid menacing it from above. Though many of the tongue twisters may be unfamiliar and several seem outdated (“winding wristwatches”?), the punchy illustrations capture their buoyant essence. Few will be able to resist saying them aloud. All ages.