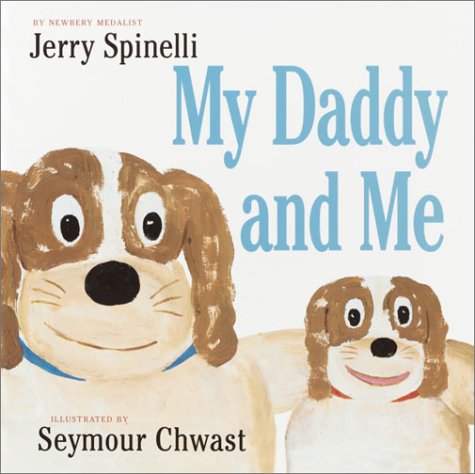 MY DADDY AND ME

"I can't wait for my daddy to come home from work. There are so many things to do!" begins Spinelli's () pleasing enumeration of all the father-son possibilities to be explored between father's return and bedtime. Chwast () here departs from his usual fine black line and evenly applied saturated colors in favor of thick brushstrokes that convey the playfulness of the text. In the opening shot, readers view a forlorn cream-colored puppy with floppy brown ears and markings around the eyes sitting patiently by the window, holding a red truck. But once united with Daddy (who looks like a giant-sized version of his offspring), the canine narrator grows exuberant. " 'Hey!' [Daddy] calls to [neighbor] Mrs. Jones/ 'Who's this cowpoke riding me?' " Only the pup's hind paws hold onto his father's neck as he raises his front paws in the air like a cheerleader. In other spreads, father lets son get behind the wheel to drive to Kalamazoo ("right there in the driveway"), wrestle on the rug and bake gingerbread cookies. The scenarios may not be new, but the warmth emanating from parent and child is comfortingly universal. In Spinelli's soothing closing scene, father serenades son ("Never, ever is my daddy too tired to sing me a lullaby when it's time for bed") and Chwast gets all the details right: the pup is tucked in, the moon shows outside the window, and a glass of water sits on the nightstand (next to a lamp with a cat-patterned shade). Ages 3-6.