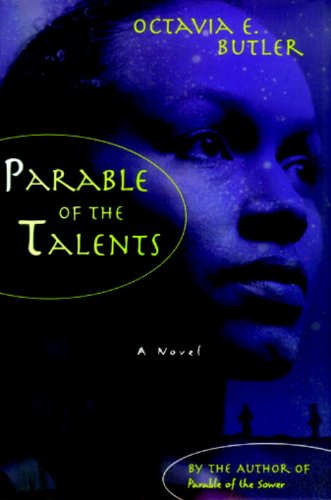 Parable of the Talents

Lauren Olamina, a black teenager, grew up in a 21st-century America that was tearing itself apart. Global warming, massive unemployment, gang warfare and corporate greed combined to break down society in general and her impoverished southern California neighborhood in particular. A victim of hyperempathy syndrome, a disorder that compels its victims to believe they feel others' pain, Lauren found herself homeless and alone in a violent world. Escaping from the urban jungle of Los Angeles, Lauren founded Acorn, a hard-working, prosperous rural community based on the teachings of Earthseed, a religion she herself created and centered on the ideas that God is Change and that humanity's destiny is to go to the stars. Butler's extraordinary Parable of the Sower (1996) detailed the aforementioned events. In this equally powerful sequel, Acorn is destroyed by the rising forces of Christian fundamentalism, led by the newly elected U.S. president, the Reverend Andrew Steele Jarret. A handsome man and persuasive orator, seemingly modeled in part on Pat Robertson, Jarret converts millions to his sect, Christian America, while his thugs imprison, rape and murder those they label ""heathens,"" all the while kidnapping their children in order to raise them in Christian households. The narrative is both impassioned and bitter as Butler weaves a tale of a frighteningly believable near-future dystopia. Lauren, at once loving wife and mother, prophet and fanatic, victim and leader, gains stature as one of the most intense and well-developed protagonists in recent SF. Though not for the faint-hearted, this work stands out as a testament to the author's enormous talent, and to the human spirit.. Author tour. (Nov.) FYI: In 1995, Butler received a MacArthur Foundation (""genius"") Award.
close
Details