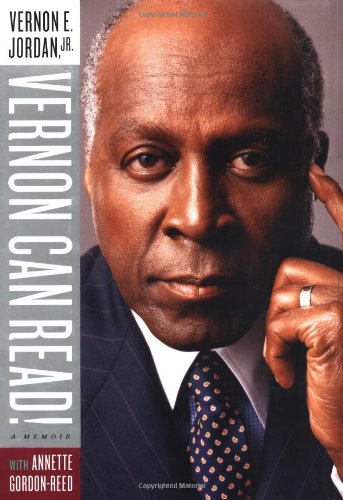 VERNON CAN READ! A Memoir

While Jordan's autobiography garnered interest from the moment its publication was announced, its ultimate form surprises. Disappointment awaits those expecting Clinton/ Lewinsky dirt, since the book "effectively ends in the 1980s. All that has happened to me since then is too close to be considered true memories," Jordan writes. But his narrative mission here is not recent political scandal. Jordan means to "bridge the gap" between the years African-Americans were forced to move to the back of the bus and the time when "a young black girl [Vernon's daughter Vickee] could be so confident in her humanity that she found it unfathomable that anyone could try and take it away from her." The bridge, of course, is Jordan himself, and he tells his success story with a concentration and devotion that gives it all the fervor and logic of a good long speech. While readers are treated to some particulars of Jordan's youth (waiting tables for his mother's catering business, attending segregated Atlanta schools in the 1940s and early '50s and then the predominantly white DePauw University) and the trajectory of his early career as a field director for the NAACP, executive director of the United Negro College Fund and president of the National Urban League), there are few more personal revelations. With its lack of extraneous detail and its studious avoidance of private thoughts, this is less a traditional memoir than an extended exposition of an impressive CV. Even so, it should remind people of this chapter in American history and Jordan's crucial role in it.