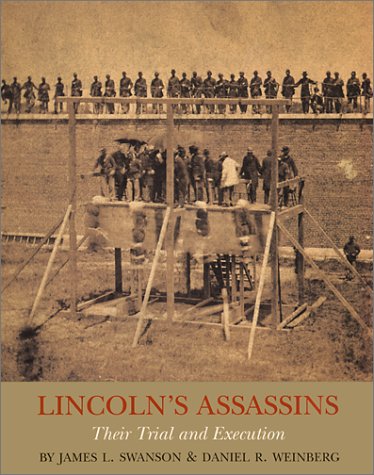 LINCOLN'S ASSASSINS: Their Trial and Execution

This beautifully produced, groundbreaking volume of over 300 documents, portraits, memorabilia and arcana relating to Lincoln's assassination manages to transcend its immediate historical importance to become something artistically unique. Swanson and Weinberg, both Lincoln collectors and scholars, have assembled a remarkable collection of images relating to the assassination and the fate of its perpetrators (whose guilt some historians question today), including many that have not been easily available before. Some of the more common images include memorial posters of the assassination, wanted posters, newspaper reports and reproductions of plates from books about the event. They also reproduce letters from a young John Wilkes Booth as well as hand-written death warrants issued by the Union army. But the centerpiece of the volume is the collection of photographs taken by Alexander Gardner of six of the indicted conspirators as they awaited trial. These photographs—formally posed, beautifully shot and eerily evocative—are reminiscent of the work of artists such as Diane Arbus and Robert Mapplethorpe. Equally moving and disturbing are Gardner's photographs of the executions by hanging of several of the conspirators—photos in which one can see the reality of death. Swanson and Weinberg contribute enough text to place all of these artifacts in historical context and provide an intelligent, informative primer on the topic.