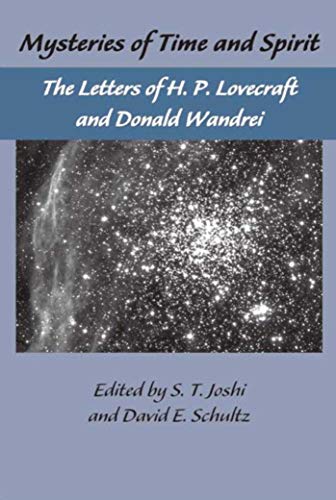 MYSTERIES OF TIME AND SPIRIT: The Letters of H.P. Lovecraft and Donald Wandrei

For the inaugural volume of their Lovecraft Letters series, editors Joshi and Schultz have chosen wisely and well: first, because the correspondence between H.P. Lovecraft (1890–1937) and Donald Wandrei (1908–1987), the co-founder of Arkham House in 1939, is largely complete on both sides; second, because the two writers often discuss horror fiction, as well as the timeless vagaries of getting published, whether in magazine or book form. In 1926, Wandrei, then a University of Minnesota undergrad, wrote the master of a fan letter, initiating a friendship that would last until HPL's premature death. Besides extolling the beauties of his native Providence, R.I., and the old cities he visits on his travels, Lovecraft takes obvious pleasure in guiding his protégé's reading and introducing him to other members of his circle, including Arkham House's other future co-founder, August Derleth. As the years pass, HPL has more trouble placing his work, but he remains true to his principles: "it is clear that I can never land anything more unless I cater to the debased pulp ideal—and that I shall never do." Though lacking the illustrations and authorial commentary of Willis Conover's classic (1976), this book should satisfy both scholars (footnotes at the end of each letter make for easy access) and fans eager to know more about these two pulp-era paragons from their own words.