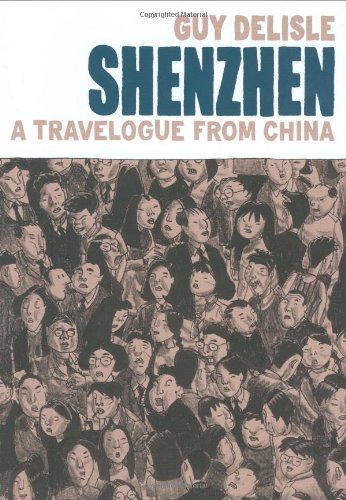 Shenzhen: A Travelogue from China

Last year's introduced Delisle's acute voice, as he reported from North Korea with unusual insight and wit, not to mention wonderfully detailed cartooning. is not a follow-up so much as another installment in what one hopes is an ongoing series of travelogues by this talented artist. Here he again finds himself working on an animated movie in a Communist country, this time in Shenzhen, an isolated city in southern China. Delisle not only takes readers through his daily routine, but also explores Chinese custom and geography, eloquently explaining the cultural differences city to city, company to company and person to person. He also goes into detail about the food and entertainment of the region as well as animation in general and his own career path. All of this is the result of his intense isolation for three months in an anonymous hotel room. He has little to do but ruminate on his surroundings, and readers are the lucky beneficiaries of his loneliness. As in his earlier work, Delisle draws in a gentle cartoon style: his observations are grounded in realism, but his figures are light cartoons, giving the book, as Delisle himself remarks, a feeling of an alternative Tintin.