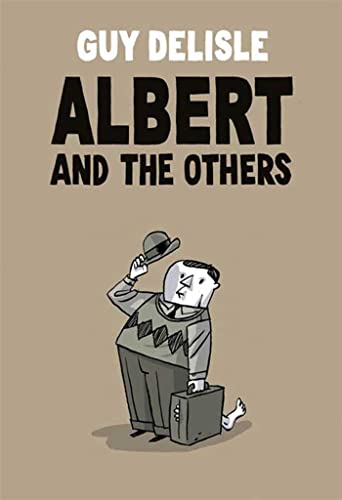 Albert and the Others

This series of wordless portraits of men is slightly disturbing, especially in its attitude toward women’s bodies, but one imagines that’s the point. Smiling, mindless women are chopped up by magicians and pulled out in pre-disassembled pieces by psychiatrists. One is tied to train tracks, run over and sewn back together by a cowboy. It’s definitely creepy commentary when a naked middle-aged fisherman reels in a naked woman, carefully measures her, then throws her back. But the book feels more like an artistic statement than a narrative, and it’s not art for art’s sake so much as art as a hammer to whack you with. At its best, it makes one giggle and wince at the same time. At its worst, it’s upsetting. The art feels quirky with its frumpy little grayscale men (some pages are toned sepia and others are blue). While not a masterpiece like Delisle’s autobiographical comics or , it’s worth reading. Much the way he captured the sense of danger in the Communist blandness of North Korea, Delisle’s portraits capture something of the sinister blankness of the Western workingman.