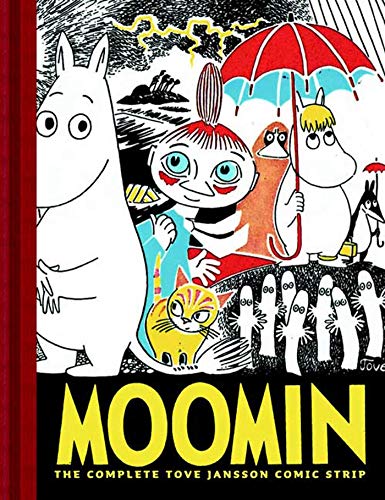 From 1953 to 1960, the late Finnish artist Jansson drew a comic strip about her creation Moomin for the . Though the strip was an enormous success around the world, this is the first North American edition of an expressive and endearing classic. Moomin's stories begin simply (he needs to rid his home of freeloaders, or goes on a family vacation) and snowball into a series of amusing, whimsical misadventures, which can involve elements of the fantastic, like magic, monsters and ghosts. Although Moomin, his parents and his girlfriend, Snorkmaiden, are trolls, they look like friendly hippopotamuses. Moomin is reminiscent of a big, chubby baby; there is something of Charlie Brown in him: Moomin is like a child beset by life's troubles and usually (but not always) too passive to get angry and fight back. Adults should appreciate Jansson's satire—although she always provides happy endings, dark undercurrents are at play: one episode opens with Moomin attempting suicide; reunited with his missing parents, he's abandoned by them again. Jansson's deceptively childlike style masterfully conveys her characters' personalities. Moomin's mouth rarely appears, but his eyes, his brows and his gestures are expressive and endearing.