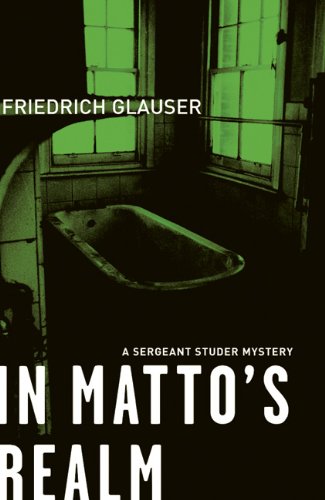 First published in 1936, this golden age gem contains echoes of Durenmatt, Fritz Lang's film and Thomas Mann's . Just as Mann's Berghof Sanatorium mirrored the schadenfreude of the world outside, so the Swiss madhouse in Glauser's psychologically wrenching Sergeant Studer novel, the second to be translated into English (after 2004's ), darkly illuminates the anguish and disorientation of Germany between the wars. When Peter Pieterlen, a child murderer, escapes from the Randlingen Psychiatric Clinic in Bern, Dr. Ernst Laduner asks Det. Sgt. Jakob Studer to investigate. Studer soon discovers the body of Randlingen's director in the clinic's boiler room, his neck broken. Despite the clinic doctors' claim that Pieterlen killed the man, Studer has doubts that leave him wondering if someone is using pseudopsychological theories and pretenses to commit murder. Both a compelling mystery and an illuminating, finely wrought mainstream novel, this classic will make it clear to American readers why the German-language prize for detective fiction is named after Glauser (1896–1938).