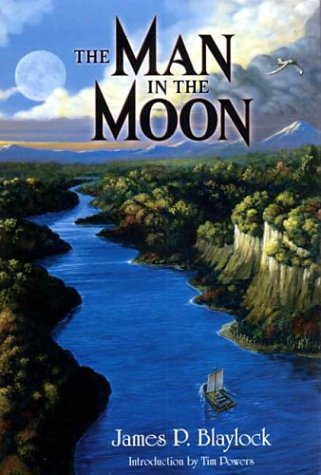 THE MAN IN THE MOON

Diehard fans of World Fantasy Award winner Blaylock will find this resurrected first novel of interest both in comparison to (1982), a much revised version of the latter part of the original manuscript, and as an illustration of the author's admitted early "happy aversion to plot," which is balanced by his attention to atmosphere and by sheer imagination. Master Cheeser Jonathan Bing of Twombly Town, a rural island of comfort and complacency more than a little reminiscent of Tolkien's Shire, reluctantly embarks upon a raft voyage downriver with some eccentric comrades in an attempt to save the traditional Christmas exchange of cheeses for honey cakes. In his afterword, Blaylock cites and as influences, but encounters with trolls, goblins, elves, invisible airships and an unusual timepiece belonging to the titular character (who also turns out to be a Master Cheeser) make the story seem more like a Terry Pratchett rewrite of Conrad's . As befits a journey downriver, the plot flows slowly, sometimes becoming stalled on a metaphorical sandbar until backwash forces the raft free along a current that bears no relation to what has taken place before. In the wake of the journey's satisfying ending, the reader will savor the memory of the sheer beauty of the prose, but ultimately this is a book that will appeal mostly to the author's strongest admirers, for whom its weaknesses are strengths.