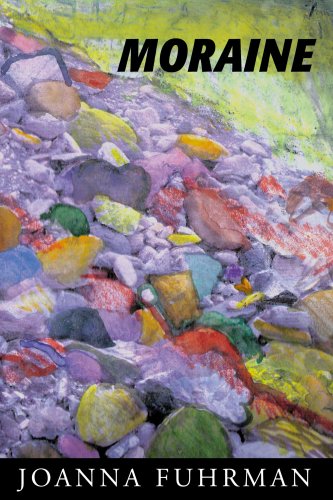 A moraine is a hill or mound of soil and debris created by a moving glacier; the exciting mishmash of insights, associations, charms, jokes and biting social commentary in Fuhrman's third collection partake of the sedimentary, omnium-gatherum variety her book title (which shows up in the titles of all the individual poems here) suggests. Where real moraines occur in valleys or forests, though, Fuhrman's poems evoke busy, chatty, gossipy, cities: her dense surfaces owe something to the New York School, something to New York itself: "the workers sleeping/ in the skyscraper don't mind the rain banging against/ the windows and I am not the car being driven/ under the river." The flirtatious "Moraine for Bob" mocks (and admires) the idioms of erotic love ("I was never a wild Slinky/ in the sex-club sense of a toy") and of literary history. Jumping from topic to topic, trope to trope, the Brooklyn-based Fuhrman unifies her "moraines" partly by their recurring themes and inside jokes, but mostly by her speaker's strangeness and charm. With this follow-up to her well-received (2003), she's well positioned somewhere in the nifty triangle formed by Frank O'Hara, Ted Berrigan and the Shins.