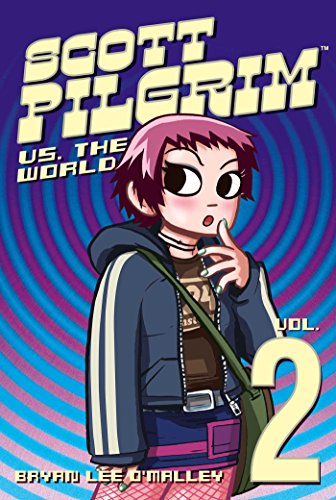 Scott Pilgrim vs. the World

The first volume of this slacker-manga-action hybrid introduced Scott Pilgrim, a video game–playing regular guy whose love life leads him into irregular trouble. This second book opens with a peek into Scott's past: we see his early romantic troubles and the talentless band that sprang from them. In the present, Scott's new romance with mysterious messenger girl Ramona Flowers sends his former girlfriend, teenage Knives Chau, into a fury that culminates in an all-out kung fu battle between the two. In the surrealist twists that fill O'Malley's work, characters who are introduced in dreams end up playing major parts in the "real" life of the story, and you never know when the meandering lives of these Canadian 20-somethings are going to shift into high-action fight sequences. O'Malley gained acclaim and award nominations for the first Scott Pilgrim book, and he deserves the recognition. The story continued here is delightful, light, clever and surprising. O'Malley takes a manga influence—big eyes, informational inserts and explosions of energy—and throws in pop culture references—a band named the Clash at Demonhead, Ramona's skater turned movie star ex-boyfriend—to create a fresh, grungy style. The narrative jumps, combined with sharp, sardonic dialogue, make this a great oddball tale that captures the energy of a generation.