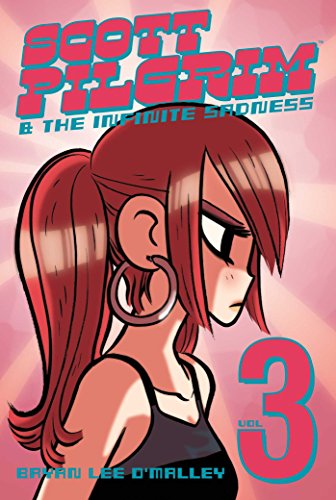 Scott Pilgrim and the Infinite Sadness

O'Malley's cult-favorite series about a Canadian slacker attempting to defeat his crush-object's seven evil ex-boyfriends is the weirdest, funniest and coolest Western variation on the manga aesthetic to date, and the third volume is even more hilarious than the first two—mostly because O'Malley's running gags are the kind that improve with repetition. At their core, the books are outrageous allegories for coming to terms with a partner's former romantic relationships. This time, Scott's pitted against Todd Ingram, the current boyfriend of his ex, rock star Envy Adams; they battle at a discount department store and a rock club. Unfortunately, Todd's got psychic powers, because he's a vegan ("graduated top of his class from vegan academy and everything"), and he's also a much better bass player. On top of that, Scott's band, Sex BobOmb, can't quite get it together; 17-year-old ninja Knives Chau is still obsessed with him; and the mysterious Ramona Flowers is becoming envious of Envy. O'Malley's story zooms through its slalom-course plot, peppered with delectably witty dialogue, and he pulls in wild ideas and images from manga, role-playing gaming (Ramona's hipster handbag is actually a "subspace suitcase" from which she draws a "large hammer, +2 against girls") and video games.