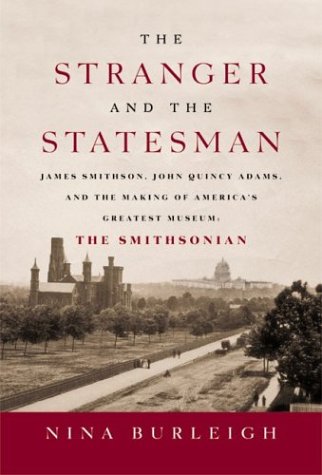 THE STRANGER AND THE STATESMAN: James Smithson, John Quincy Adams, and the Making of America's Greatest Museum: The Smithsonian

Journalist Burleigh () examines the mysterious life of James Smithson, the Englishman who left a $500,000 bequest that led to the founding of the Smithsonian Institution. Smithson, born in 1765, was the illegitimate son of the Duke of Northumberland, and Burleigh meticulously examines the legal and cultural restrictions placed on illegitimate sons in England. His mother was wealthy enough to put him through Oxford, where he studied geology, and in 1787, he became the youngest member of the prestigious Royal Society. He was fortunate in his choice of scientific mentors, too, having studied with intellectual giants such as James Hutton and Henry Cavendish. But Smithson, though a serious scientist, was a "not terribly original or brilliant" one, stresses Burleigh. After years of traveling across Europe, he died in 1829, leaving his estate to his nephew and orders that, if the nephew died without heirs (as he did), his estate would go to the United States (for reasons still unknown, as Smithson had no connection to America) for the purpose of creating an institution in Washington for diffusing knowledge. Surprisingly, as Burleigh relates, there were those in Congress who wanted no part of Smithson's bequest. Southern leaders, like John Calhoun and Jefferson Davis, who aimed to protect slavery by limiting the federal government's role, wanted to refuse the bequest. Those welcoming the gift were led by Congressman John Quincy Adams, who worked tirelessly to enact the legislation founding the Smithsonian Institution, which was finally passed in 1846. While Burleigh takes us on a diverting historical jaunt, there simply isn't enough factual information about his protagonist to make the story compelling. After 320 pages, James Smithson and his bequest remain shrouded in mystery. 8 pages of b&w photos not seen by

The Professor and the Madman,