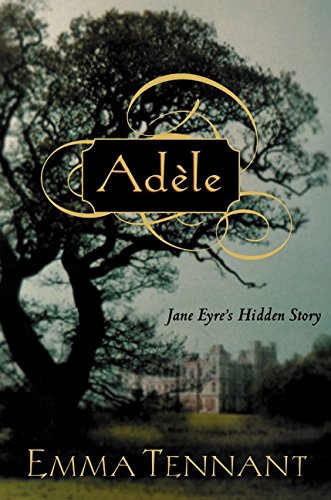 Seasoned sequel-writer Tennant (; ; etc.) offers not so much a follow-up to as a new perspective on its plot. She retells Brontë's romance from the perspective of the pampered but neglected Adèle, Rochester's "ward" and Jane's pupil. Only eight years old when the novel opens, Adèle is living blissfully in Paris with her mother, the celebrated trapeze artist and actress Céline Varens. Their cozy—if somewhat depraved—life is threatened by the sudden arrival of Rochester, an explosive alcoholic whispered to be her father. Rochester kills Céline's lover in a duel, then flees to England, while Céline flees to Italy, abandoning her daughter. Adèle is sent to stay with Rochester at Thornfield Hall, where she is befriended by the witchy "étrangère" Antoinette (also known as Bertha). Soon Jane Eyre arrives, but the bratty Adèle, still plotting the marriage of Maman and Papa, rejects her governess's "persistent banality." Adèle's narration is an awkward attempt at Victorian prose ("That she had had affection for me, I cannot gainsay; but I had been for her a conduit to the greater profit of her master's love, and little more") sprinkled with occasional, mostly gratuitous French words ("I was dismissed without even trying on the of organdy"). But the real problem is Adèle herself, whose haughtiness is merely unpleasant; she has none of the charm of Brontë's imp, let alone the charisma to anchor a whole book. Some diehard fans may enjoy this variation, but purists are warned to stay away.