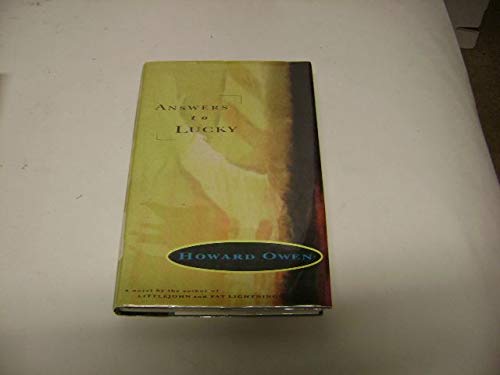 Loud, hard-drinking truck driver Thomas Wayne Sweatt wants his twin sons, born in 1946, to be the strongest and smartest in North Carolina, so he and his wife name one boy Jack Dempsey (``Lucky'') Sweatt, and the other Thomas Edison Sweatt. When Lucky contracts polio at age eight, his father begins to consider the boy a source of bad luck and thereafter favors budding athlete Tom Ed, who goes on to play minor league basketball in the 1960s. High-school dropout Lucky, meanwhile, lives in a trailer, works in a factory and is estranged from his family. This third novel from Owen, author of the praised Littlejohn, is a quietly powerful narrative, a poignant study of sibling rivalry and family dysfunction. By 1992, Lucky is running a bed-and-breakfast in Virginia with his wife, but he suddenly shows up to help Tom Ed, now an unscrupulous Republican politician, in his bid for the governorship of North Carolina. A number of subplots swirl around the campaign- Tom Ed courts the religious right and a pro-life group (while paying for a lover's abortion); he is secretly involved in a real estate swindle; a doctor is charged with murder after he accidentally runs over a fundamentalist minister-but these strands are either undeveloped or tend to the melodramatic. The real interest, as the title suggests, lies in Lucky; politically liberal, the adoptive father of two Vietnamese children and one black boy, he is an outsider in more than one sense. Lucky's search for emotional closure as he confronts his good ol' boy brother and their distant father gains emotional resonance in Owen's sure evocation of Southern life. (Mar.)
close
Details