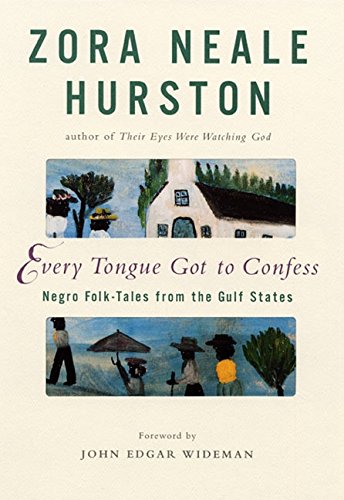 EVERY TONGUE GOT TO CONFESS: Negro Folk-Tales from the Gulf States

Although Hurston is better known for her novels, particularly , she might have been prouder of her anthropological field work. In 1927, with the support of Franz Boas, the dean of American anthropologists, Hurston traveled the Deep South collecting stories from black laborers, farmers, craftsmen and idlers. These tales featured a cast of characters made famous in Joel Chandler Harris's bowdlerized versions, including John (related, no doubt, to High John the Conqueror), Brer Fox and various slaves. But for Hurston these stories were more than entertainments; they represented a utopia created to offset the sometimes unbearable pressures of disenfranchisement: "Brer Fox, Brer Deer, Brer 'Gator, Brer Dawg, Brer Rabbit, Ole Massa and his wife were walking the earth like natural men way back in the days when God himself was on the ground and men could talk with him." Hurston's notes, which somehow got lost, were recently rediscovered in someone else's papers at the Smithsonian. Divided into 15 categories ("Woman Tales," "Neatest Trick Tales," etc.), the stories as she jotted them down range from mere jokes of a few paragraphs to three-page episodes. Many are set "in slavery time," with "massa" portrayed as an often-gulled, but always potentially punitive, presence. There are a variety of "how come" and trickster stories, written in dialect. Acting the part of the good anthropologist, Hurston is scrupulously impersonal, and, as a result, the tales bear few traces of her inimitable voice, unlike , her classic study of Haitian voodoo. Though this may limit the book's appeal among general readers, it is a boon for Hurston scholars and may, as Kaplan says in her introduction, establish Hurston's importance as an African-American folklorist.