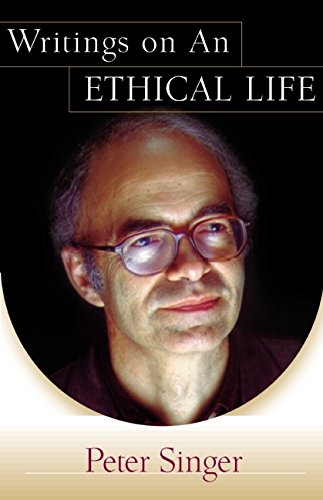 Writings on an Ethical Life

While highly controversial (his appointment as professor of bioethics at Princeton's Center for Human Values last year unleashed a storm of protests), Singer is one of the most innovative, sensitive and honest philosophers of morality in today's world. His Animal Liberation established the modern animal rights movement, and in this new collection, Singer gathers many of his writings from the past 30 years to provide a clear view of his positions. For example, in his famous essay ""Famine, Affluence and Morality,"" Singer argues that suffering and pain are bad and we should do all we can to prevent them. This thread, running consistently through Singer's writings, leads, for instance, to his much-debated position that we are justified in killing a severely disabled infant because the consequences of letting the baby live are more direDphysically, financially, sociallyDthan letting the baby die. Singer famously broadens this view to include animals. Inflicting pain on laboratory animals is unethical, Singer says, and charges that ""all consumers of animal products are responsible for the existence of cruel practices involved in producing them."" Our moral responsibility should compel us to avoid hamburgers because every time we eat one we are contributing to a cycle of suffering not only of animals, but also of humans, for the grain used to feed the animals we consume is more than enough to end hunger in many less industrialized and affluent countries. Very simply, Singer is a utilitarian and argues that the consequences of an act should determine our ethical decisions. (Dec.) Forecast: Singer, who has drawn media attention in the past for his controversial views, has a dedicated following among animal rights activists and among many physicians searching for a way to justify euthanasia of severely handicapped infants. This book makes a significant contribution to ethical discussions in modern society and will find a passionate, if small, audience.
close
Details