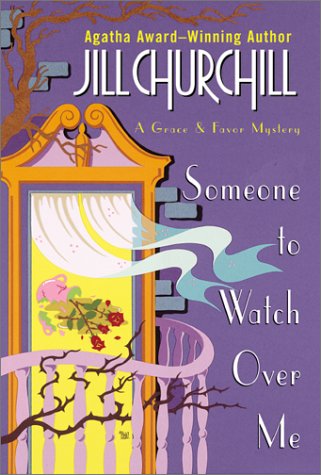 SOMEONE TO WATCH OVER ME: A Grace & Favor Mystery

After two paperback originals in this cozily charming series ( and ), Churchill makes an auspicious move to hardcover. In the long, hot summer of 1932, lovely Lily Brewster and her elegant brother, Robert, who've been left penniless by the 1929 crash, are living at a Hudson River estate, thanks to the generosity of their late Uncle Horatio. They must oversee their uncle's interests with the aid of lawyer Mr. Prinney and his hardworking wife, mindful that nothing will be officially theirs until they've occupied the place for 10 years. While Lily joins the Voorberg Ladies League to do her charitable best for the local village, her brother tends to the estate grounds. Robert discovers a long-dead body in an old icehouse, and no one knows who he was or how or when he was put there. Then a fresher body turns up, that of the out-of-work husband of one of Voorburg's hardest-working Ladies Leaguers. As Lily pursues one puzzle and Robert the other, Jack Summer, editor of the local paper, treks to Washington, D.C., to investigate a gathering of veterans seeking government relief from the Depression. Churchill neatly ties the disparate threads of the story together, all the while underscoring with subtle compassion the era's tragedies of daily life, major and minor. In contrast to the author's long-running Jane Jeffry series, which has become predictable, this one is still fresh and winning.