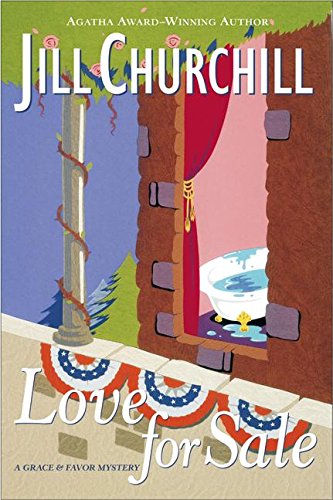 LOVE FOR SALE: A Grace and Favor Mystery

Agatha and Macavity winner Churchill once again brings the Depression era to appealing life in her latest well-plotted cozy (after 2001's ), set in Voorburg, N.Y. Siblings Robert and Lily Brewster, genteel victims of the '29 crash, run a guesthouse at Grace and Favor Cottage. On the eve of the 1932 presidential election, a "Mr. Smith" offers Robert and Lily $500 as a down payment on rooms for himself and three of his "business associates," who wish to hold a private meeting over several days. Can these men be gangsters, desperate Hoover supporters plotting to stop FDR at the last minute, or even Reds out to disrupt the election? Badly in need of cash, brother and sister reluctantly agree to the arrangement. When one of their mysterious guests gets murdered in his bath, Robert and Lily have even more cause to regret their decision. The victim turns out to be Brother Mark Luke Goodheart, a scoundrel who preached love and goodwill on the radio while fleecing the poor, the indigent and orphans. Lending some mild suspense are the disappearance of a local school teacher, the brief kidnapping of the boy Joey Towerton and Joey's mother's wait to learn whether her husband has been killed while working on Hoover Dam. Older readers will especially enjoy this look at dire times now safely past.

The House of Seven Mabels