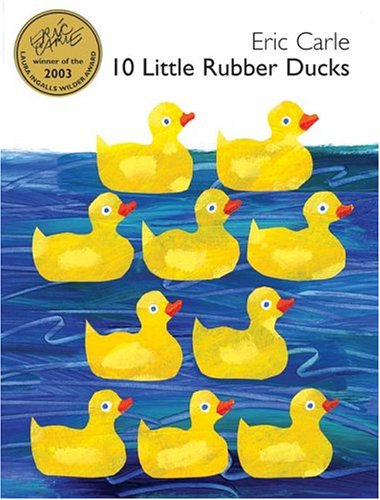 Inspired by a 2003 newspaper story about a shipment of yellow rubber ducks that fell overboard from a container ship, this winsome story pairs Carle's ( ) characteristically jewel-toned collage art with a breezy text whose intermittent repetition lends it a song-like cadence. After little yellow rubber ducks pop out of "the rubber duck machine," their beaks and eyes receive dabs of paint, and the toys are packed 10 to a box and loaded onto a cargo ship. When a wave washes one box into the sea, its contents fall out ("10 ducks overboard!" the ship's captain theatrically announces). As the ducks drift in different directions, the counting and ecological aspects of the tale emerge; one by one the toys encounter a critter from various ocean habitats. Carle's jaunty renderings of these creatures and use of crisp verbs make this a lively journey: a dolphin jumps over the first duck, a pelican chatters at the fifth, a whale sings to the ninth. Full-page collage images give way to full-spread compositions as the 10th rubber duck meets with the most satisfying fate (it encounters a mother duck and her nine ducklings). While mother and babies "Quack" goodnight to the moon, the new addition chimes in with a chipper "Squeak!" (a sound chip allows readers to hear it for themselves). A ducky tale indeed, as sublimely simple and endearing as the playthings it portrays. Ages 2-6.