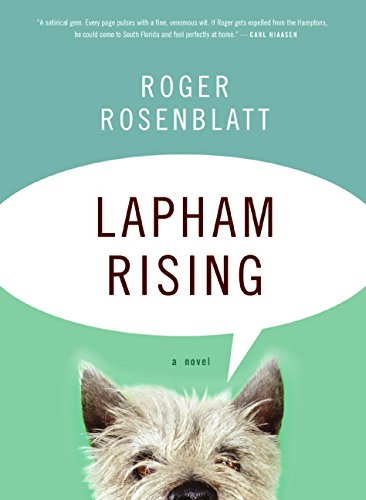 The yahoos take the Hamptons in the barbed first novel from the and PBS cultural critic Rosenblatt ( ), a wicked sendup of class relations on Long Island's East End. Harry March—a disgruntled novelist, misanthrope and recluse on a Quogue sandbar he calls Noman ("Noman is an island")—has only his little cottage and his West Highland terrier Hector to call his own: his wife has left; his three children are grown. Three generations of Harry's family are rooted in town as noble-thinking doctors and teachers, so perhaps he has his history, too, but that history, and Harry's whole quietly seething existence, are under attack by the noisy erection of the arriviste's bells-and-whistles mansion across the water. Lapham (as in Silas, not Lewis) has new money that originates in asparagus tongs. His Quogue invasion, undertaken along with sexy Southern real estate agent Kathy Polite (rhymes with "elite"), sparks Harry's very active critical mind to action, and he quickly plans fiery vengeance. Rosenblatt thumps his familiar socialist themes and is quotably tongue-in-cheek: there's a restaurant in town called Writer's Crock; in his catalogue of Lapham's is a chandelier left over from . This satisfyingly old-school stab at the Hamptons' debasement will have readers laughing out loud, even as it sends them up, too.