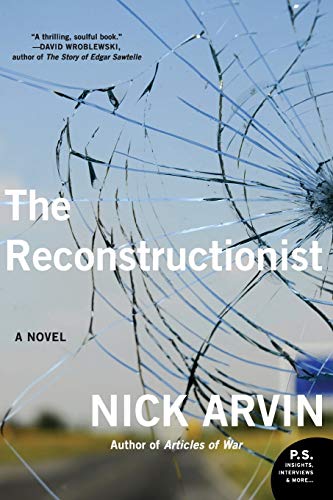 “I don’t think there’s an end to anything, really,” says John Boggs near the end of Arvin’s (Articles of War) impressive second novel. “We’re always just causing whatever will happen next.” The difficulty, sometimes the impossibility, of tracing this chain reaction lies at the heart of Arvin’s story. Ellis Barstow is a young mechanical engineer who has a traumatic accident in his past—the fiery car crash that killed his half-brother, Christopher, and permanently scarred Christopher’s girlfriend, Heather, when the two were high school sweethearts. Ellis has never stopped thinking about Heather, so when he spots her during a chance encounter years later, he is drawn to her immediately. And, through her, he’s thrust into the work of reconstructing car accidents to discover causation and assign blame. Ellis’s mentor is Heather’s husband, Boggs, a prickly, passionate, tireless devotee of this gruesome occupation. Relationships get complicated, and in the wake of another accident Ellis is forced to reconstruct what really happened during Christopher’s accident and to determine the patterns of causation and blame in his own life. Given the easy thematic promise of this setup, it’s a testament to Arvin’s restraint that the novel’s plot is rarely overwhelmed by its theme. Like Ellis’s painstaking work, the novel is suffused with sharp turns and minute, telling details that add up to a riveting consideration of risk and responsibility. (Mar.)
close
Details