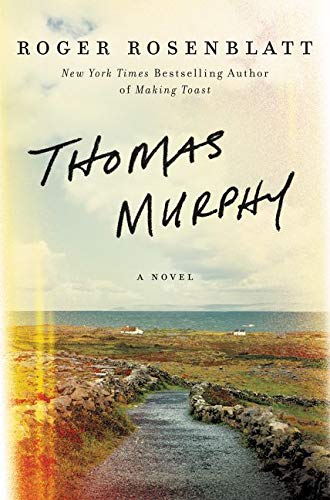 Rosenblatt (Making Toast) tackles memory loss with a fictional portrait of a septuagenarian poet whose “wonderful brain” is “ebbing a bit.” Thomas Murphy jokes, drinks, sings oldies, and wonders what he’ll be doing the rest of his life in a funny, touching narrative that begins and ends with the question, “Have I told you about this?” Born off the Irish coast on Inishmaan, population 160, Murph now resides on Manhattan’s Upper West Side. He teaches writing to the homeless and enjoys being a grandfather, but remains at loose ends following his wife’s death. Daughter Maire drags him to a doctor after he sets off fire alarms when he forgets eggs boiling on the stove. He cannot remember the term smoke detector, or his New York area code. He wisecracks his way through the medical examination, fooling no one. Afterward, a chance encounter at a bar leads Murph to an opportunity for a new beginning: there he finds Sarah, a blind woman, who provides a rare connection—someone he understands and someone who understands him. Murph’s rambling monologue reveals discernment and feeling, as a favorite George Eliot quote puts it, especially in riffs on poetry, regret, cooking, and the upside of forgetting. Smart as a whip, dumb as a post, and frail as pebbles, forgetful Murph proves a memorable hero as he faces his last years as though he won’t crash if he goes full tilt. (Jan.)
close
Details