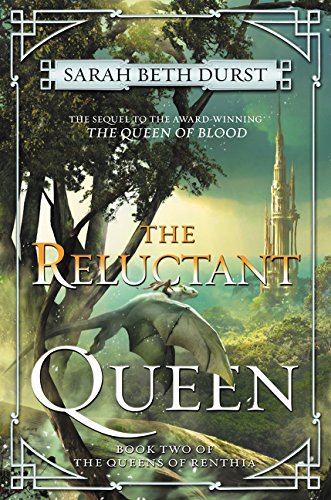 The Reluctant Queen: The Queens of Renthia, Book 2

In Durst’s excellent second Queens of Renthia fantasy (after Queen of Blood), the world of Renthia remains a dangerous place where the spirits of the elements want to kill humans, and only powerful queens, such as Queen Daleina of the Forests of Aratay, can control them. But shortly after becoming queen, Daleina falls ill and appears to be dying, forcing her champions, including her previous trainer, Ven, to find women who might be strong enough to take the throne. Along with the queen’s guard, Alet, Ven finds and trains Naelin, a mother who has been trying to hide her raw power from everyone, even herself. Meanwhile, Daleina’s lover, Hamon, calls upon his estranged mother, a poisoner, to help determine how Daleina became sick, a task that also draws in the queen’s teenage sister. Always lurking in the background is the threat of war from the neighboring country of Semo. Durst throws a lot of balls in the air but manages to juggle them deftly now that her world’s well established and she can focus on the large cast. She even manages some humor (mostly around Naelin’s young children) amid the danger. New readers will benefit from starting with the first book, but they’ll want to get to this one as soon as they can. Agent: Andrea Somberg, Harvey Klinger Agency. (July)
close
Details