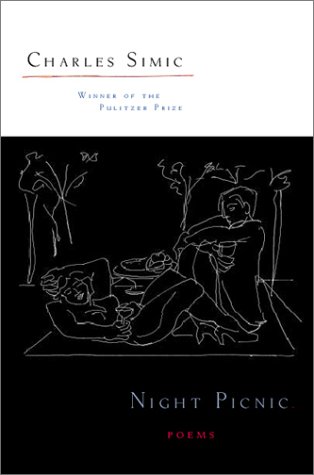 Simic's accomplishments as an American poet have deep roots in his wartime-Serbia childhood: his sly, uncanny arrangements of household words in short poems—some comic, others genuinely scary—convey a sense of menace everywhere, and of gentle, sad sarcasm as the right response. This first book of poems since 1999's continues Simic's familiar, unsettling methods and extends them into the terrain of older age. In "Past-Lives Therapy," "a straw-headed boy in patched overalls" becomes a man "constructing a spaceship out of a coffin"; in "Three Doors," "Some fellow/ with that it-pays-to-be-cagey look" stands in for the cagey poet. "Icarus' dog," "aesthetic paradox," "a Jesus lookalike/ Who won a pie-eating contest in Texas," a Kafkaesque "small nameless bug" and an empty schoolhouse add to the well-stocked gallery of amiable grotesques, among which "we the bewildered" make our way. The third and most moving of the book's three parts departs from Simic's usual pattern, offering saddened epigrams followed by powerful meditations on death and old age, considered as a raindrop, as a kitchen or as a restaurant—"The check is being added in the back/ As we speak." Simic's poems can grow predictable in their methods—image succeeds image, each short-lined stanza as haunting or hard-boiled as the next. But Simic (who won a Pulitzer for ) remains a powerful, and funny, chronicler of an individual world—one where pastry, omelets and queen-size beds offer their ambiguous pleasures, and where, inseparably, "the butchery of the innocent/ Never stops." It is a world that should be familiar.