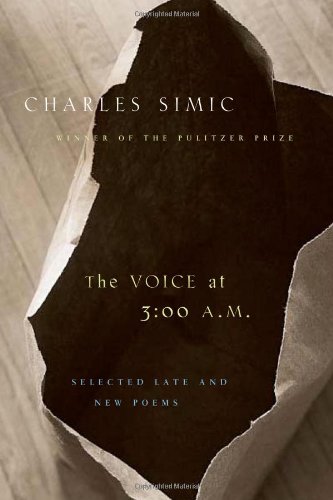 With his 1989 collection a Pulitzer winner, and 1996's an NBA finalist, Simic has achieved major recognition for his wryly acerbic meditations and send-ups; this selection from his last eight books (excluding the prose poems of ), matched with 19 new poems, should pave the way for more. On re-reading work that is approaching its 20th year in print, readers will find that Simic's signature quatrains and other free verse stanzas retain their forceful mix of joy, wit and melancholy: "How do you like that?/ I said to no one./ How do you like that?/ I said it again today upon walking." The new poems, most no more than a page long, include the neo-Yeatsian foreboding of "Grayheaded School Children" ("Their dead fathers shuffle past them/ On their way to the kitchen"); a creepy, Raymond Carver-esque "Empty Barbershop" ("The invisible barber's greasy fingers/ Making your hair stand straight up"); and, near the end, "The Hearse": "Pulled by a teenage Jesus already carrying his cross/ Pulled by your first love/ Pulled by every dog you ever had/ Pulled by the fly whose legs you plucked." The table of contents reveals the book's chronological organization, and the books from which the poems are taken. But refreshingly, there are no section breaks within the text, allowing readers to follow the unbroken arc of this poet's skeptical, humane meditations without interruption. It's an opportunity that will be exploited even by fans who own multiple Simic collections.