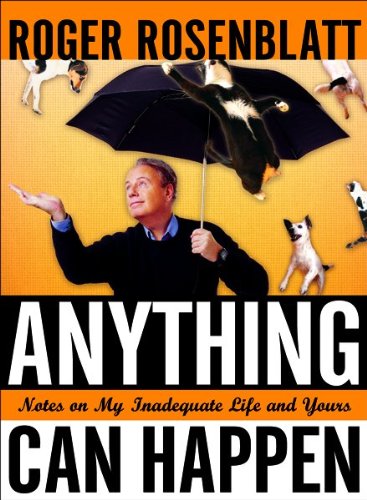 ANYTHING CAN HAPPEN: Notes on My Inadequate Life and Yours

"Lyndon Johnson badgered Hubert Humphrey into killing a deer on a visit to Johnson's Texas ranch, then he sent the vice president the severed head of the animal to remind him of his power over him. That's really all there is to it." So begins "Tyranny for Beginners," one of the 60 or so short meditations on less dramatic forms of powerlessness—political, economic and otherwise. The best pieces here are significantly more scathing, and more offhandedly probing, than anything Rosenblatt does for his "essays" on PBS's . "Dogstoevsky" satirizes the morbidity of realistic Russian fiction, while "What Bothers Me" indirectly demonstrates how it does matter if banks fail in Yonkers. Both pieces are fuzzy in concept and execution, but their very formlessness gives them a kind of immediacy. A few longer pieces are interspersed among one- and two-page snippets. The tale of how Rosenblatt () and his brother pretended to be the switchboard operators at the legendary Luchow's restaurant documents human gullibility. "My Stump Speech" and "Things One Would Like to See in the Movies" send up political clichés and cinematic ones respectively. Consumer society takes it on the chin in "How I Turned into the Westin" and "The Bathroom for You." The best is nearly the last, as well as the longest; after you read "Ashley Montana Goes Ashore in the Caicos," celebrity journalism in particular and pop culture in general will never quite sound the same. The cover shows it raining cats and dogs, not inappropriately.