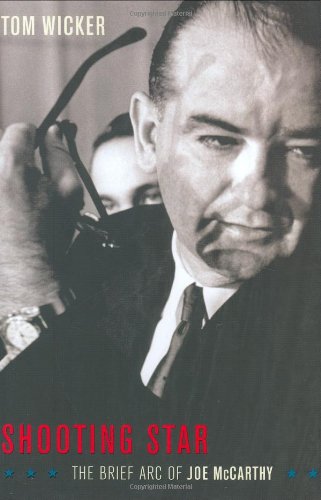 America's most notorious demagogue emerges as less a fanatic than an opportunist in this lively political biography. Longtime political writer Wicker, author of well-received studies of Eisenhower and other presidents, notes that the 1950 speech that catapulted McCarthy to fame, in which he claimed to have a list of 205 Communists in the State Department, was a last-minute substitute for a talk on housing policy. When the speech drew unexpected media attention, the obscure Wisconsin senator deployed his lifelong talent for self-promotion and political theater to keep himself in the headlines. Wicker considers McCarthy, who uncovered not a single Communist, "a latecomer to, and virtually a nonparticipant in the real anticommunist wars" that continued after his downfall. Wicker situates McCarthyism within the prevailing climate of Cold War tensions, anticommunist paranoia and conservative animus against organized labor and New Deal liberalism. Against this backdrop McCarthy appears a human figure, undone by his own bullying manner, alcoholism and hubris in antagonizing powerful foes in the Senate and Eisenhower administration. Although Wicker's take on McCarthy isn't groundbreaking, he combines insightful political history with a deft character study to craft a wonderful introduction to this crucial American figure.