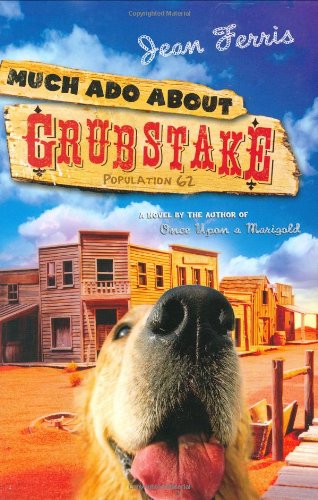 Much Ado About Grubstake

Written in the same spirit as Audrey Couloumbus's , Ferris's ( ) comical Wild West adventure introduces a group of wittily portrayed characters, all of whom live in Grubstake, a mining town that has seen better days. Orphaned at age 14, Arley Pickett, the owner of a boarding house, longs for the kind of excitement she finds in her "Penny Dreadful" novels. Then one day a mysterious city slicker presents Grubstake's citizens with "an offer no sane person would refuse." For reasons unknown, the stranger wants to buy all the town's mines, which have been closed for years. While some "Grubs" are eager to sell and move on, others, like 16-year-old Arley, are suspicious of the buyer's motives. Trying to get to the bottom of things, the teen finds herself in the middle of an adventure every bit as eventful as one in her Penny Dreadfuls, and manages to find romance as well as danger along the way. Readers will embrace the feisty heroine along with her quirky, down-and-out boarders and an assortment of colorful neighbors: Everdene Hannigan, the tavern owner, who "was opposed to men, at least in a romantic way"; newspaper editor Duncan McKenzie, who "knew all the big words in the dictionary, and used them every day"; and Wing Lee, the town baker, who is as good at giving advice as he is at making bread. Ages 10-up.