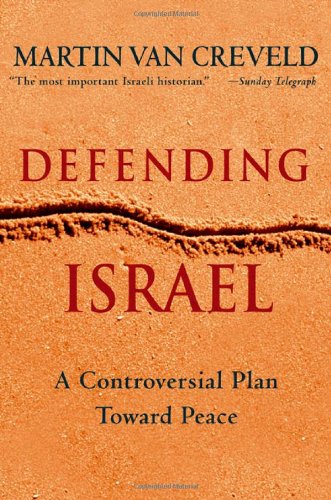 DEFENDING ISRAEL: A Study of Her Borders and a Plan Toward Peace

In this clear and original book, Creveld ( etc.) argues effectively for Israel's withdrawal from the occupied territories—unilaterally, if necessary—on the grounds that it will make Israel more secure. A history professor at Hebrew University in Jerusalem, he details the change in Israel's military thinking after its 1967 victory in the Six-Day War and claims it's time to change once again. Creveld proposes a "military revolution": more mobile forces and a more decentralized command system that will be more capable of countering terrorist threats. This should be accompanied by a withdrawal from the Palestinian territories, he contends, which are sapping Israel's military and moral superiority at levels that far outweigh their economic and ideological value. While he admits that an Israeli withdrawal will not completely rid the country of terrorism, he asserts that it will likely take away some of the motivation for suicide bombers. He also argues forcefully that the conventional threat to Israel from Arab states has passed and that the nuclear threat, post–Saddam Hussein, may be exaggerated. At a time when the debate is bogged down and Israeli Prime Minister Ariel Sharon is stuck in a back-and-forth with his party over withdrawing from Gaza, Creveld's innovative ideas deserve a wide readership. Maps. Agent, Artellus Ltd., U.K.