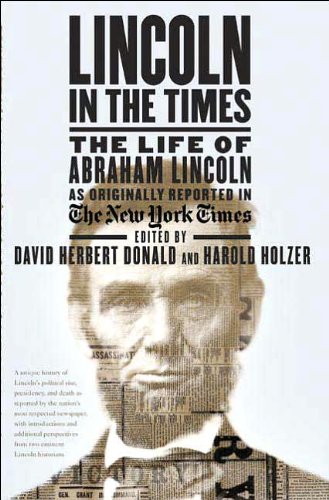 Lincoln in The Times: The Life of Abraham Lincoln as Originally Reported in The New York Times

Pulitzer Prize–winning Lincoln biographer Donald and Holzer ( ) bring together the Old Gray Lady's coverage of the central events in the 16th president's life and tenure, beginning with the Lincoln-Douglas debates. The paper came late to these dramatic oratorical shows and predicted (rightly) that Douglas would take the cake. Indeed, up through the 1860 Republican convention, the didn't imagine that Lincoln had a chance of getting elected to any post in Washington; when he did win the presidential nomination, the paper declared "Underdog Wins!" The supported the new president, but shouted "Wanted—A policy!" when, about a month after his inauguration, Lincoln seemed unable to formulate a response to Southern secession. (Lincoln stashed a copy of this piece in a file labeled "Villainous articles.") On its heels came another villainous headline, "Wanted—A Leader!" The printed the Emancipation Proclamation as well as the Gettysburg Address—and led the nation in mourning Lincoln's assassination. The editors' annotations, interspersed throughout, help interpret the primary sources. Lincoln buffs will enjoy going back in time with this delightfully antiquarian anthology.