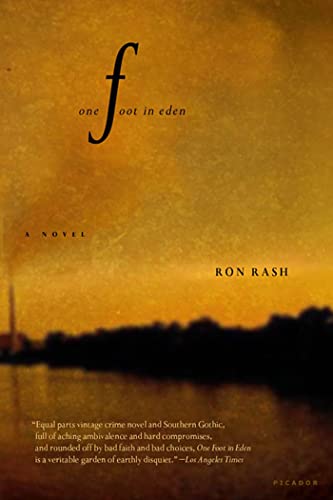 ONE FOOT IN EDEN

Rash's moody, potent slice of Southern gothic fiction centers on a murder and its devastating effect on a small Appalachian town in the 1950s. When Holland Winchester, local troublemaker in tiny Seneca, S.C., vanishes without a trace, it's up to town sheriff and WWII veteran Will Alexander to search for answers. Holland's mother claims to have heard a gunshot, and she insists that neighbor Billy Holcombe killed her son. Events unfurl slowly and methodically, and it's soon revealed that Billy's pregnant wife, Amy, had been having an affair with Holland. Shifting from Sheriff Alexander's narration, the story continues in Amy's voice as she recounts her frustration with Billy's sterility and her increasingly desperate need to bear a child. An impulsive visit to a spell-weaving widow for advice proves to be Amy's downfall when she's told that if her husband can't give her a child, she should "lay down with a man who can." The ensuing drama of infidelity, jealousy and betrayal is told by a chorus of characters with distinctive Appalachian voices: chief among them are Amy, Billy and Amy's young son, Isaac, whose discovery of the identity of his real father is both heartbreaking and liberating. As the valley is flooded to make room for a power company's land takeover, further tragedies unfold. Poet and short story writer Rash writes lyrically while maintaining the suspense of the central mystery. As each character reveals his or her secrets, the tale builds into a quiet storm—and a terrific first novel.