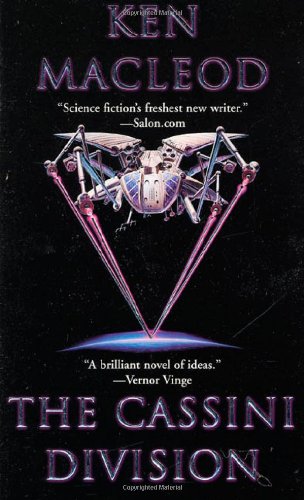 A rare but successful fusion of hard SF, space opera and serious political speculation, this is the third novel from MacLeod, who's Scottish, but his first to be published in the U.S. The story takes place in a 24th-century Sol system still recovering from a near-catastrophic clash between humanity and post-humanity, the latter a society of godlike, possibly insane former humans who have uploaded themselves into computers and set up their own civilization on Jupiter. At the center of the narrative stands Ellen May Ngwethu, commander of the spaceship Terrible Beauty and an officer in the Cassini Division. This semiautonomous military organization operates as Earth's frontline defense against the dangerous and enigmatic post-humans. Society on Earth, based on a unique combination of socialist and anarchist beliefs, has achieved a high degree of environmentally responsible prosperity in recent years, but the post-humans on Jupiter are an ever-increasing threat. As the forces of the Cassini Division prepare to destroy the post-humans without warning, Ngwethu finds herself on a dangerous mission through a wormhole to reestablish contact with another potential enemy, the long-lost, libertarian-capitalist interstellar colony of New Mars. Despite heavy doses of political theory, MacLeod generally manages to keep the first half of his novel moving at acceptable speed, aided by solid prose, a strong protagonist and some fascinating bits of high tech. The latter half of the tale, which features a battle in space, complete with comets used as superweapons, is more lively. This is an enjoyable and ambitious novel, and hopefully presages the American publication of MacLeod's earlier work. (July) FYI: MacLeod's first two novels, The Star Fraction and The Stone Canal, each received the Prometheus Award from the Libertarian Futurist Society.
close
Details