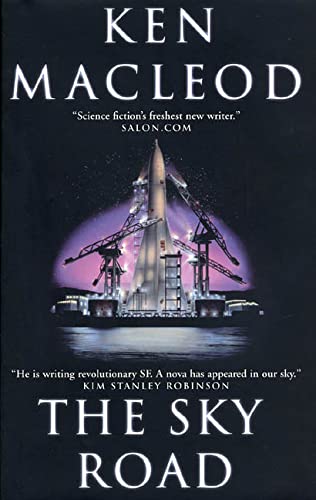 Unlike most American SF writers, MacLeod (The Stone Canal), a Scot, has little good to say about the U.S., democracy or capitalism. Indeed, the future history within which he sets his complex but compelling novels pretty much assumes the collapse of Western-style democracy in the near future and its replacement by a crazy-quilt of various socialist, libertarian and anarchist states. MacLeod's current tale follows two separate plot lines. In the near future, Myra Godwin-Davidova, an American expatriate, former Trotskyist and current leader of a small, high-tech socialist workers' state surrounded by Kazakhstan, struggles to keep her nation afloat against the onslaught of the Sheenisov, an aggressive nation bent on world conquest. As her political alliances crumble, Myra's only trump card is a cache of outdated nuclear weapons planted decades ago in Earth orbit, but if she uses them she could destroy the world. Hundred of years later, Clovis colha Gree lives in a bucolic near-utopia almost totally lacking in violence. Although his people treat virtually all electronics and computers with superstitious dread, the scientists of his day, called tinkers, are attempting to build the first spaceship since Myra's distant era. Clovis, a young scholar working on the spaceship, plunges into intrigue when a secret cabal of tinkers uses him to recover forbidden computer data. The intellectual difficulty of MacLeod's work may prevent him from acquiring a mass readership, but his complex plotting, crisply delineated military action, well-drawn characters and trademark byzantine radical politics are sure to endear him to a growing number of aficionados. (Sept.)
close
Details