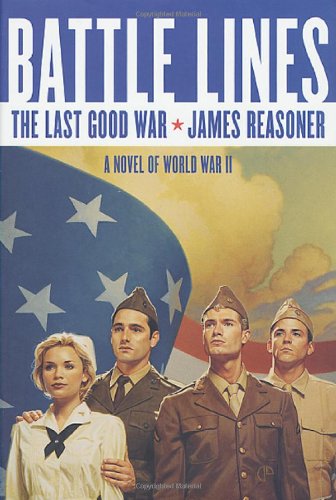 It's January 1941, and four young friends are getting ready to enlist at the beginning of this fictional equivalent of a TV miniseries, a novel that feels like exactly what it is: the prologue to a series of novels about WWII. Joe Parker writes pulp stories; his brother, Dale, is a natural mechanic who likes to race fast cars; and Joe's friend Adam Bergman has built himself up physically to defend himself against anti-Semitic baiting, which is something that Adam's girlfriend, Catherine Tancred, hears all too much of from her Austrian father. But it's Dale's liaison with the wife of a powerful Chicago banker that leads everyone (including Catherine) to that enlistment booth, since the banker's desire for revenge against the Parkers and their friends is only satisfied when Joe and Dale agree to enlist. Author Reasoner (whose Civil War series includes the novels and ) tells a competent story, neither surprising nor disappointing; unfortunately, it's not exciting, either. There's a formulaic silver screen feel to everything, from the basic training scenes (which would probably end up on the cutting room floor) to the obvious device of setting up the only two fathers in the book as a martinet (Catherine's dad) and a drunken lout (Joe and Dale's). No tough choices for the protagonists: all they have to do to be heroic is stand up against unlikable characters. In the end, everything reads as introductory material, from Joe and Dale's assignments as radioman and mechanic to the ending itself, which manages to feel both like a cliché and an afterthought. It's on a diminished scale—call it The Breeze of War.