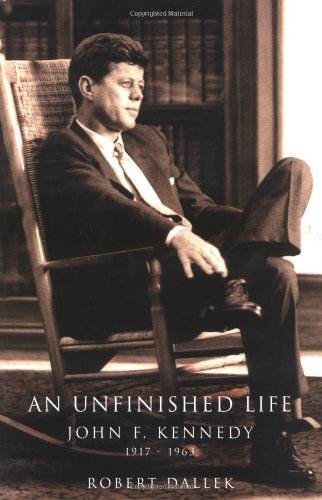 In this riveting tour de force, Boston University history professor Dallek () delivers what will most assuredly become the benchmark JFK biography for this generation. A master of the art of narrative history, Dallek is also the first biographer since Doris Kearns Goodwin to be granted unrestricted access to key Kennedy family papers (most importantly, the Joseph and Rose Kennedy Papers) in the JFK Library. This is a substantial and significant trove to which Dallek brings a refreshingly critical eye. He has also mined many nuggets of key information from the papers of JFK's colleagues, doctors and friends.

Thus Dallek has significant new ground to break on a range of fronts including but not limited to Kennedy's health, politics, personal recklessness and love affairs. Dallek's revelations about JFK's health, based on previously unavailable medical files maintained by Kennedy's personal physician, have already received significant publicity from the excerpt in December 2002. But here Dallek expands on that information and reveals (for the first time) the full extent of the medical coverup orchestrated by the Kennedy family: a coverup that involved the destruction of key medical records even after JFK was in his grave. On the political front, Dallek uses new inside information from a Kennedy associate to reveal the detailed mechanics (and enormous scope) of the use of Kennedy money to purchase the West Virginia primary in 1960. At the same time, Dallek has new evidence on both Jack's philandering and his recklessness. Example: During the same 1960 campaign on which his father spent millions, JFK risked it all by inviting an underage cheerleader to his hotel room. As is appropriate, close to two-thirds of this biography covers Kennedy's truncated presidency. In one of the book's most important sections, Dallek marshals new evidence that JFK did not view with favor the expansion of the war in Vietnam, and that he most likely would not have sanctioned such an expansion. Throughout the book, Dallek stops short of worshipping his subject. He is a Kennedy admirer, but he never allows this admiration to cloud either his focus or his truth telling. Dallek is to be thanked for providing the thoroughly researched, well-sourced, responsible and readable biography that has for so long been wanting in Kennedy scholarship. Illus. not seen by .