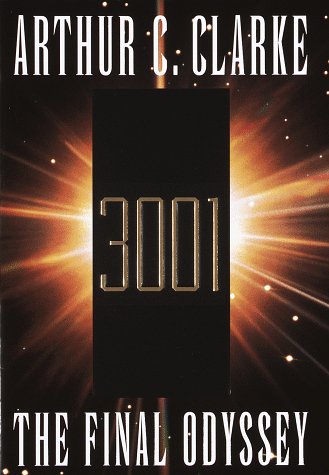 Frank Poole was the astronaut murdered by the berserk computer HAL in 2001: A Space Odyssey. In this third sequel to that classic novel, Poole is returned to life after his frozen body is recovered floating near Neptune. Much of the novel centers on Poole's reentry into society as, in a series of vignettes, he is introduced to the wonders of the year 3001. These include an enormous space habitat completely encircling the Earth and anchored by four gigantic space elevators; velociraptors genetically engineered for use as gardeners; and the braincap, a machine that allows the mind to absorb information almost instantaneously. Halfway through the novel, Poole travels to the former planet Jupiter, now the mini-sun Lucifer. There, he learns about the development, sparked by a mysterious monolith, of a civilization on Europa, about the banning of humanity from that Jovian moon, and about the occasional ghostly visitations of astronaut Dave Bowman (introduced in 2001) to the Lucifer system. Defying the ban, Poole lands on Europa and encounters both Dave and HAL, now fused together into one semi-autonomous program within the Europa monolith. From them, he learns that the monolith's signal broadcast a millennium ago was a request for further orders. He also learns that an answer is expected momentarily and that humanity won't be pleased by the result. It is only at this point that Clarke injects any real tension into his story. Unfortunately, the threat he imagines to humanity's future is dealt with somewhat offhandedly in a mere 30 pages; then the story ends. This novel is a must read for those who have followed the saga so far, but it's too thin to interest those new, or at least unfamiliar with, the series. Major ad/promo; first serial to Playboy; Literary Guild and Doubleday Book Club alternate selection; Science Fiction Book Club main selection; audio rights to Random House Audio; foreign rights sold in the U.K., Spain, Latin America, France, Japan, Brazil, Holland, Italy, Portugal and Sweden. (Mar.)
close
Details