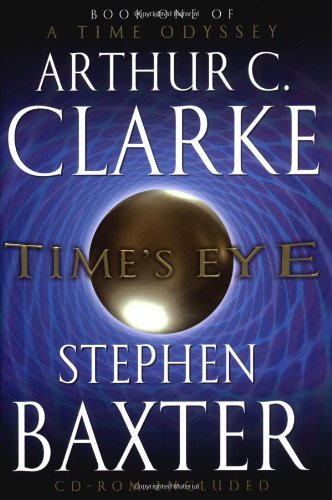 TIME'S EYE: Book One of a Time Odyssey

Clarke, with Baxter ( ), probably the most talented of the former's several collaborators, have cooked up an exciting tale full of high-tech physics, military tactics and larger-than-life characters in the first of two novels related to the bestselling senior author's Space Odyssey series. In an awesome and unexplained catastrophe, the earth has been literally diced and put back together again. Each of the segments of terrain (and you can actually see the dividing lines between them) comes from a different era, some of them millions of years apart. As the novel opens, a 19th-century British army company, stationed on the Afghan-Pakistani border, captures an Australopithecine mother and child, just as a team of 21st-century U.N. peacekeepers crash their helicopter nearby. Later they join forces with Alexander the Great. Simultaneously, a Soyuz descent vehicle, having just left the International Space Station, crash-lands in the middle of Genghis Khan's army. Eventually, the armies of Alexander and the Khan converge on Babylon, the last remaining large city in Eurasia and a titanic battle seems imminent. Fans of will have fun with the many references to that earlier novel. Although not flawless, this is probably the best book to appear with Clarke's name on it in a decade.