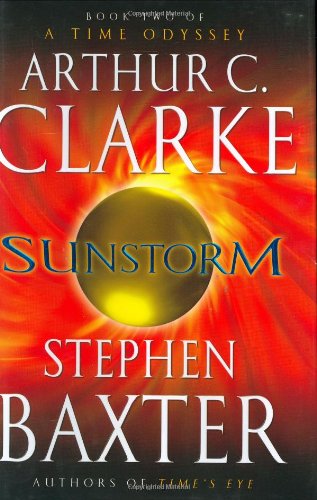 Set in the same universe as Clarke's and its sequels, Clarke and Baxter's second and final Time Odyssey book (after 2004's ) will especially appeal to fans of hard SF who appreciate well-grounded science and humans with a can-do attitude to problem solving. In 2037, the same day the enigmatic alien Firstborn return Bisea Dutt, the heroine of , to her home in London, the city grinds to a halt as a sun storm sends a massive surge of energy to Earth, temporarily destroying the world's electronic infrastructure. This surge presages another, much larger sun storm, due to hit in 2042, which will utterly annihilate life across the globe. Against all odds, the nations of Earth come together to construct a huge space umbrella that will shield the planet from the worst of the barrage. The answer to why the sun's activity is being manipulated to wipe out life on Earth must wait, given the day-to-day difficulties and politics of the construction project. The five-year sweep of events, the plethora of characters and the cuts from Mars to Earth to the moon during the climactic sun storm give the story a movie montage feel, but the focus on the enormously challenging task at hand will keep readers turning the pages.