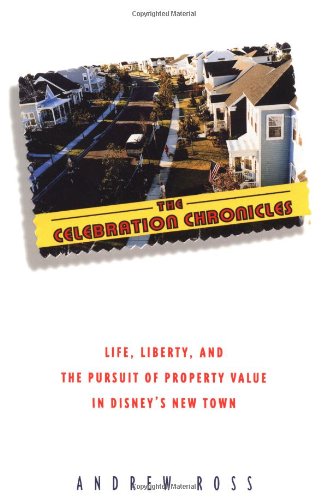 The Celebration Chronicles: Life, Liberty, and the Pursuit of Property Value in Disney's New Town

The object of unrelenting media scrutiny since its inception in 1996, the small, Disney-built town of Celebration, Fla., has, according to Ross, been portrayed as either a real-life embodiment of a Disney fantasy of good, clean American values or as a haven for slavish Disney devotees who fall in line like dutiful Stepford wives. Like Douglas Frantz and Catherine Collins, whose Celebration, U.S.A. (Forecasts, July 26) records 12 months in the life of the town, Ross lived there for a year and came away with mixed feelings. The director of the American Studies program at NYU, Ross points out that the one thing most vividly separating Celebration from other communities is the glare of the media: perennially aware that they're under scrutiny, residents are subject to ""performance anxiety"" and tend to be highly self-conscious about their actions and decisions. While Disney's ideas about desirable urban design--which include such features as Muzak continually piped into the main street from speakers hidden beneath the palm trees--do suggest a sugar-coated utopia, most of the residents Ross encountered were seeking an alternative to the isolating design of traditional suburbia. In this respect, Ross believes, Celebration is at least ""a step in the right direction."" Though Frantz and Collins more vividly describe the community and its residents, Ross's writing is refreshingly unacademic as he adroitly analyzes both the various upheavals plaguing this fledgling town and the day-to-day lives of Celebrationites of all ages, providing an astute look at a notable, if in some respects surreal, experiment in community building. (Sept.)
close
Details