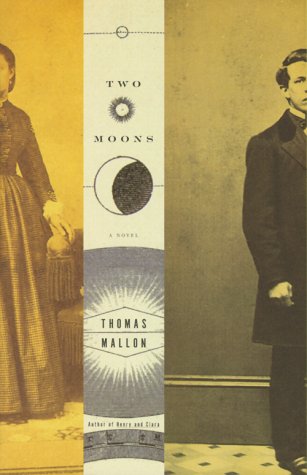 Mallon's fifth novel invokes the central themes of his last three--astronomy (Aurora 7), 19th-century Washington (Henry & Clara) and the common ground of social and sexual politics (Dewey Defeats Truman). Unfortunately, the result is as studied as it sounds, and to the themes that Mallon has built so interestingly upon, he has added little here, despite the enormous promise of the book's Big Metaphor--the two moons of Mars. The story's setting is the nation's capital in the early years of Reconstruction; Rutherford B. Hayes is president, and there is a wave of reform in the air. Two moons--or rather, men--orbit a radiant planet--or rather, a woman. Roscoe Conkling, a corrupt senator from New York, as the larger moon, is entranced by the bright and independent-minded Cynthia May, a Civil War widow in her 30s. Conkling's competition is a fair-haired, diffident Southerner--the smaller moon, Hugh Allison--who has the advantage of Cynthia's affections. Cynthia and Hugh are colleagues at the funds-strapped Naval Observatory, located in the malarial Foggy Bottom section of D.C. But the observatory's discovery of two Martian moons, one large, one small, brings new hope that the astronomy center will get a new building in a healthier setting. Meanwhile, Hugh, a contrarian romantic, convinces Cynthia of a grander celestial strategy: ""Stop thinking of what comes to us,"" he tells her, ""[s]uch as the Sun's light.... Start thinking of the light that might come from us."" Cynthia embarks on a secret plan to grease the wheels for Hugh to acquire a high-powered lamp from France and get it through U.S. Customs in New York, a ""machine"" run by Senator Conkling. His intention is to mount it atop the still incomplete Washington Monument and send a light into the heavens. This poorly developed plot element soon gets eclipsed when Hugh is bitten by a mosquito, sealing his fate, and Cynthia's, and abrogating the reader's interest. Although Mallon reliably marshals the kind of period detail that makes him a formidable historical novelist--the nickel dropped into a glass box as fare on the horse carriages of the capital--too often the minutiae becomes annoying in the absence of emotional color or narrative movement. In addition, Mallon's reluctance to expose the passions underlying the characters' lives lengthens the distance we already feel from the Washington of the 1870s. This reticence is a true shortcoming when the parallels between the Foggy Bottom malaria and today's AIDS crisis occur to the reader. The two moons of Mars are glimpsed but for a short time, not to return for two more years to the aided eyes of the observatory. More could have been made of them. (Feb.)
close
Details