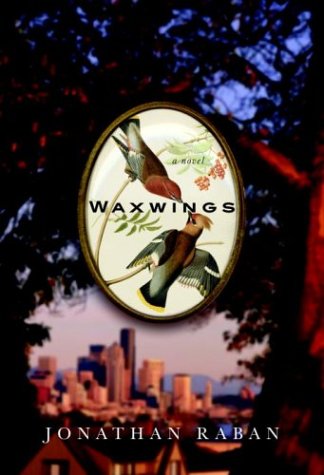 A Hungarian-born British expatriate settled in dot-com–frenzied Seattle is the bemused protagonist of this inspired jumble of a novel, travel writer Raban's first since 1985's . Tom Janeway is a professor of writing, a novelist and a public radio commentator; his wife, Beth, works for GetaShack.com, a startup providing virtual neighborhood tours for prospective house buyers. They have a four-year-old son named Finn, and they appear content. Behind the happy façade, though, Beth has grown deeply unhappy with her self-absorbed husband, his immersion in books and his pretentious radio voice ("his fucking rolled 's")—she hankers after expensive cars, a bright new condo and honest attention. Unfolding in counterpoint to Raban's chronicle of the rather civilized collapse of their marriage is the story of a shady Chinese immigrant called Chick; he survives a horrific journey to America and becomes an off-the-books contractor who bullies Tom into employing him to renovate their gloomy old house after Beth moves out. Beneath the surface, larger currents are swirling, and Tom is suddenly swept up in them when he goes for a walk on a local nature trail and is misidentified as a suspect in a series of child murders. Chick's unpredictable antics sharpen the sense of menace, while a subplot about an egotistical British novelist who is considering a residency at Tom's college provides effective comic relief. Raban's caustic, affectionate commentary on the manic gyrations of millennial America unites these disparate plot lines, making his novel a wry paean to the cluttered, freewheeling lives led by the motley residents of an immigrant nation.