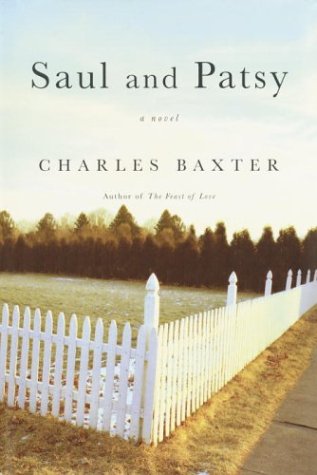 Despite its title, this searching, reflective novel is less concerned with couplehood than it is with the fretful inner life of one half of the eponymous married pair. Saul Bernstein, a literary descendant of Bellow's Herzog, is a transplanted Baltimore Jew, observing his newfound hometown—the "dusty, luckless" fictional city of Five Oaks, Mich.—with an ill-at-ease hyperawareness. Young-marrieds Saul and Patsy move to Five Oaks from Evanston, Ill., when Saul is hired to teach at the local high school. They rent a farmhouse, where they make love in every room and even in the backyard, settling into the rhythms of domestic life. Patsy, a former modern dancer who finds work as a bank teller, gives birth to a daughter, and with infinite patience tolerates her "professional worrier" of a husband. The narrative is dense with quotidian detail, precisely charted shifts of consciousness and pitch-perfect moments of emotional truth, but Baxter (, etc.) doesn't have full control of the novel's architecture. The narrative crests occasionally on signs and wonders (early on, Saul has a spiritual epiphany after sighting an albino deer), but turns on the inexplicable suicide of Saul's illiterate, inarticulate student, Gordy Himmelman. Blamed by some for the boy's death, Saul must struggle against real community hostility instead of imagined anti-Semitism. Resolutely, he refuses to give up on his adopted Midwestern hometown, bringing this luminously prosaic if sometimes meandering novel to a quietly triumphant conclusion.

The Feast of Love